The village of Santa Cruz de la Serós is famous for its traditional architecture, with its houses made of stone and finished with the typical roof of slabs and the spectacular trunkconic chimneys. We are talking of one of the villages with bigger architectonic value of the county.
Its surname, "de la Serós", comes from its secular connexion with the noons (sorores or serores, in Aragonese) who, until the end of the XVI Century, lived in the Monastery of Santa María. 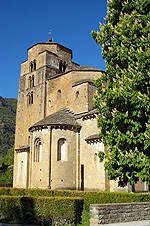 The Monastery was founded by Ramiro I of Aragón around 1060. At the beginning it was used as feminine Monastery reserved only to the kings and the principal Aragonese nobles' daughters. The monumental Church of Santa María, jewel of the Aragonese Romanesque of the XII Century, has remained practically intact, whereas the different rooms of the monastery were disappearing with the passage of time.

The Parochial Church, dedicated to San Caprasio, is at the exit of the village. This is a typical Lombard construction, that probably dates back to the X-XI Centuries. At its head, a tough tower, built at the end of the XIIth Century, stands up.

This area is considered Place of Communitarian Interest and has been declared zona ZEPA (Area of Birds Special Protection). Not in vain, San Juan de la Peña Sierra houses one of the most numerous populations of Lammergeiers ("Gypaetus barbatus"), Griffon Vultures ("Gyps fulvus"), and Egyptian Vulture ("Neophron percnopterus") in the whole Iberian Peninsula.

San Juan de la Peña Mountain is one of the most outstanding Aragonese ecosystems of Middle Mountain. In spite of the important modifications that took place in the forest mass due to the "Desamortización", the mountain of San Juan de la Peña conserves a great vegetal and animal wealth. In 1920 San Juan de la Peña was declared National Site, becoming the third Protected National Space of all the State. Nowadays it's been reclassified as Natural Monument. As well as Oroel, it is an enormous syncline of hanging conglomerates with summits on Mount Cuculo and Mount San Salvador.

In the most heavily protected areas we'll find plants requiring greater atmospheric humidity. We may even find some plant and animal species characteristics of high mountains in the higher areas with oceanic influences. Rupicolous species of great botanical interest such as bear's ear, valeriana longifolia and others grow on the scarps. Wild mushrooms and birds round out an ecosystem full of live.

San Juan's pinewoods, fir woods and holm-oak woods are a paradise for people fond of mycology. Many species of great culinary value are found on the prairies and forests of this Outer Pyrenean Sierra, such as Boletes, Delicious Milk Mushrooms, Inkcaps, Parasol Mushrooms, Field Mushrooms, St. George's Mushrooms, ... etc. 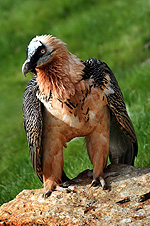 Among the ornitofauna is outstanding, without any doubt, the notable presence of the Griffon Vulture ("Gyps fulvus"). Other birds of prey which feed on carrion such as the Egyptian Vulture ("Neophron percnopterus"), which remains in our lands from Mars to September, or the rare Lammergeier ("Gypaetus barbatus"), enjoy as well these environments, inaccessible for many of their possible predators.

But the collection of boulders of San Juan de la Peña is also inhabited by black Common Ravens ("Corvus corax") and Red-billed Choughs ("Pyrrhocorax pyrrhocorax"), by rupicolous little birds such as the Alpine Swift ("Apus melba"), the Black Redstart ("Phoenicurus ochruros"), the Rock Sparrow ("Petronia petronia") and the Crag Martín ("Ptyonoprogne rupestris") or the Marten.

In winter, the Wallcreeper ("Tichodroma muraria") wanders skilfully, up and down, along the most upright walls. The pinewood is the habitat for many forest birds: Great Spotted Woodpeckers ("Dendrocopos major"), Great Tits ("Parus major"), Coal Tits ("Parus ater"), Crested Tits ("Parus cristatus"), Eurasian Sparrowhawks ("Accipiter nisus"), Northern Goshawks ("Accipiter gentilis"), Treecreepers ("Certhia"), Warblers ("Phylloscopus"),... that go over the trunks, the branches and the tops of the trees of these mountainous jungles. The stealthy steps of mammals such as the genet, the marten or the wild cat go practically unnoticed.

The dry fir wood is other outstanding wood of conifers on the Group of San Juan de la Peña. In the inside of the "Barranco de la Carbonera" fir wood is often heard the call of the Black Woodpecker ("Dryocopus martius"), the bigger of our woodpeckers. The Eurasian Treecreeper ("Certhia familiaris"), the Common Crossbill ("Loxia curvirostra") or the Great Tit ("Parus major") are some of the bird species typical of these environments.

To the notable catalogue of living species associated to the conifer forests of San Juan de la Peña, those which live and develop inside the hardwood and deciduous woods must be sum up. In Autumn, both holm oaks and gall-oaks produce acorns, which many of the animals that live in these forests, such as the Wild Boar or the Common Wood Pigeons ("Columba palumbus"), eat up with delight.